As a volunteer educator and raptor handler at Willowbrook Wildlife Center, I have observed many wild animals released back to nature after rehabilitation, but never a snowy owl!

Living in Illinois, I do not have many opportunities to see a snowy owl, for their home is in the Arctic tundra. I do not know about you, but the harsh landscape in the arctic is not yet a top destination site for my vacations, so I am unlikely to see many of these owls in the wild. Occasionally snowy owls can be spotted in the Chicago area during the wintertime when some venture to northern Illinois, but I have not had the chance to see one except in rehab or in captivity. 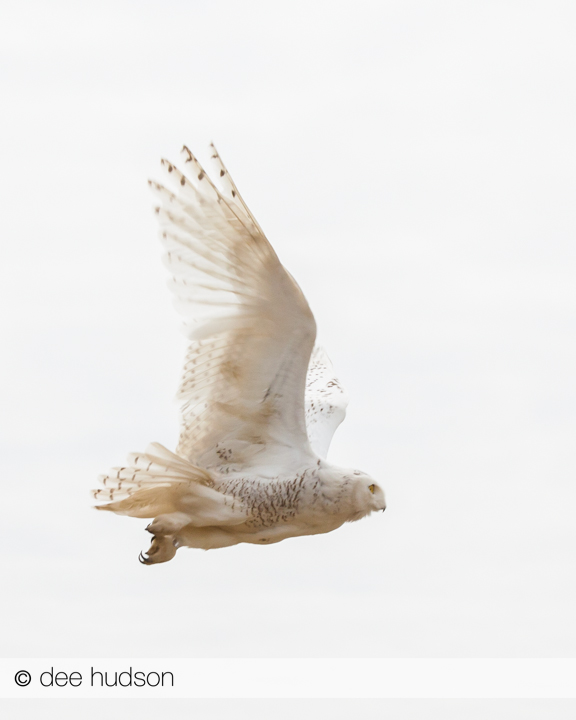 As a raptor handler at Willowbrook Wildlife Center (that is me pictured to the left!!!), I have the opportunity to work with many birds of prey, but out of all the raptors I handle, owls are one of my favorites. I admit that they fascinate me, from their sharp, hissing and clacking beaks, all the way down to their strong–feathered toes. In the photo, I am manning a male great–horned owl that is blind in the left eye. Permanently disabled, this owl has lived at the center since 2005. After manning this bird on my glove for a while, my arm can ache. That makes perfect sense, for the great–horned is the largest owl that lives year–round in Illinois. My arm would be in trouble if I manned a snowy owl though, for it is the largest (heaviest) owl in North America.

In the above photo, wildlife specialist, Rose Augustine, hefts the snowy owl carrier to the release site at Pratt’s Wayne Woods. This is not an easy feat, for these large owls can weigh up to 6.5 pounds. To reduce stress on the animal, the carrier is kept covered during transport.

The snowy owl is a ‘natural celebrity.’

I always enjoy snapping shots of other photographers taking pictures. I love this one. This image reminds me of paparazzi following a celebrity and I must admit, I lined up right behind them for my own shots of this magnificent bird.

The first glimpse of the snowy owl as he or she awaits the return to the wild.

Isn’t this a beautiful owl, with its white speckled plumage? How about those piecing yellow eyes? I know if I were the prey, I would run quickly. What do they eat, you ask? The snowy owl’s favorite food is lemmings and they consume about 1600 of these small critters each year. What is a lemming, you wonder? Well, it is a very cute and furry rodent (and I admit, I do like my rodents). To learn more about this arctic rodent, read this article by the Nature Conservancy, “The Amazing Lemming: The Rodent Behind the Snowy Owl Invasion.”

Rose opened the carrier door and the snowy owl just sat in the door opening for about 30 seconds, not moving. Then the owl leaned through the door, glanced in all directions, and took flight.

The rehabbed snowy owl soars out of the carrier.

It is such an exciting moment to see wild animals leave captivity and return back to nature — I never tire of witnessing this sight. This snowy owl was admitted to Willowbrook Wildlife Center at the end of December 2014. A car probably hit the owl, for the bird suffered from skin tears and a fractured wing. While the owl was healing, the wildlife center kept the animal in a small and quiet space. When the fracture was healed, the owl graduated to larger spaces, and then finally to the center’s raptor flight cage, a 100 foot circular flight space that helps the birds develop their muscle tone.

The released snowy owl glides away over the grasses in Pratt’s Wayne Woods.

The owl looked great and completely healed as it flew across the preserve. Since the owl breeds in the arctic during the summer, it should begin its long journey north. Safe and happy trails to you, beautiful bird!

Originally a Minnesota farmer's daughter, my rural roots inspired my interest in nature and conservation. For over twenty years, I have volunteered in education about the natural world: interpreting and teaching classes as a docent at Brookfield Zoo and volunteering as an educator and raptor handler for Willowbrook Wildlife Center.

After completing my degree in photography, I began exhibiting my images in galleries and printing my photographs for purchase. In 2012, I began a photography project documenting Illinois prairie restoration at Nachusa Grasslands. Now, years later, I am one of Nachusa's photographers, and I regularly volunteer as a steward, to restore agricultural fields back to prairie. To view my photography, please visit: www.deehudsonphotography.com.